The Top 10 Exercises with Human Names

Some exercises such as squats are so common that everyone who has ever set foot in a gym knows what they are (even if they don’t know how to do them correctly). Other exercises have names that just make sense. Two great examples are Band Pull Aparts and Face Pulls. Even if you had never seen or heard of these exercises, the name just makes sense. Then, you have this odd category of exercises with really weird names like Cook Hip Lift, Zottman Curls and Pallof presses. Throughout the history of the iron game, there are several exercises that have been named after lifters, coaches and trainers. While some of them sound cool and look different, they just aren’t worth your time (which is why I’m stopping at 10). However, here are ten unique exercises with human names that will turn heads in your gym AND give you some fantastic results. 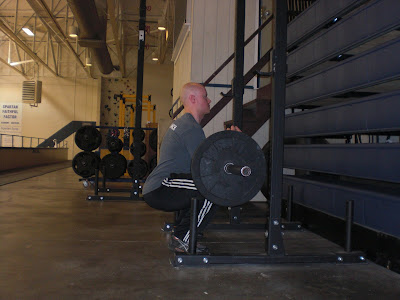 1. Anderson Squats
Anderson squats are named after Olympic Weightlifting Gold Medalist and Famous Strong Man Paul Anderson. Anderson did many of his early training at a farm and was very creative with his equipment and training. To get stronger in the squat (Anderson unofficially squatted 1000lbs), he would did a hole in the ground and stand in the hole with a barbell on the ground and squat the weight up from a dead stop on the ground. To progress the lift, Anderson would start with a shallow squat (i.e. a deep hole in the ground) and gradually add dirt to the whole thus increasing his range of motion.

Today we have power racks so you don't have to go digging holes in your backyard or behind your gym. To do an Anderson Squat, simply have the bar on the safety pins, get underneath it (as shown in the picture below) and blast the weight up. This exercise has the following benefits: 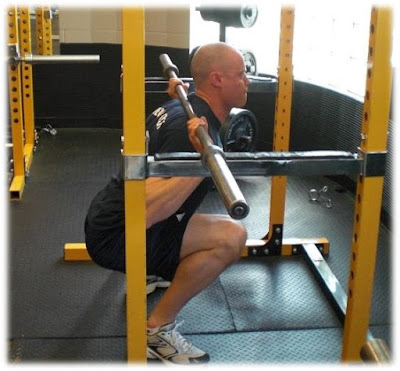 2. Arnold Press
When it comes to lifting weights, few names are more universally recognizable than Arnold. While famous for his amazing bicep and chest development, Arnold also gave the lifting world a unique should press variation affectionately known as the Arnold Press. This exercises starts like you just finished a rep of dumbbell curls (palms facing in) and finishes like a traditional shoulder press (palms facing out). In the middle is a nice rotation. This rotation has some unique advantages:

3. Cook Hip Lift
This exercise is named after Physical Therapist Gray Cook and made famous by Mike Boyle. It is basically a single leg glute bridge done with your other leg pulled up to hold a ball to your chest. The challenge for most people is that their glutes don’t work. When they try to extend their hips with their glutes, something else compensates. One common compensation is hyperextending your lowering back. While this is easy to do with a standard glute bridge, you can’t do it with the Cook Hip Lift. If you try to cheat with your lower back, your knee will pull away from your chest and you will lose the ball. Another compensation is trying to use your hamstrings. While the hamstrings do help with hip extension, they cannot complete hip extension. If you try to use your hamstrings instead of your glutes, you will know with Cook Hip lifts because you get a nasty cramping feeling as if your hamstrings are about to tear. Also, if your hip flexors are tight, you won’t be able to get all the way up until your body is straight. Cook Hip lifts are a great assessment tool and a great glute activation drill to use before training. In addition, if you are stuck trying to train without any equipment, it is one of the better body-weight-only hip extension exercises you can do.

4. Hack Squat
When you think of Hack Squats, you might think of the Hack Squat machine at the gym. However, this exercise was originally done with a barbell and created by George Hackenschmidt the Russian Lion. The Hack Squat looks like a deadlift, but the barbell is behind you which makes it much more of a squat. While this is not the most knee friendly exercise (i.e. if you have knee problems, move on!), it is a great way to hammer your quads. Also, it is a heavy barbell squat that does not require a power rack. This can be helpful if you train at home or someone at your gym decides to turn the squat rack into curl rack.

5. Meadows Rows
This is a 1-arm angled barbell row was popularized by Bodybuilder and Coach John Meadows. It offers the following cool benefits:

6. Pallof Press
This exercise is named after another Physical Therapist – John Pallof. It is a sideways version of an ab wheel rollout where your arms at like levers to vary the resistance. Here are some of the unique benefits:

Bonus tip: while this exercise is great with a cable, a fun way to do it is with a band and a partner. I first started using it this way with athletes because our training area didn’t have a cable stack and we had a limited number of bands (it allows 2 athletes to train at once with one band!). However, I found that it offered a unique benefit – competition. When you are doing this, you are thinking, “I can’t give out before my partner – I have to keep up with him/her. This naturally causes you to up your game and give it all you have!

7. Pendlay Rows
This exercise is named after famous weightlifting coach Glenn Pendlay. It is a bent-over row variation where you start each rep with the bar on the ground like a deadlift. This allows you to power up some serious weight as you can let your legs help get the bar moving. It also feels a bit easier on the lower back as you are not having to stop and reverse the direction of the barbell in mid-air.

Bonus exercise: if you have a trap bar, trying using it for Pendlay rows. This is my preferred bar for bent-over rows as it allows for a neutral grip and is easier on the low back.

8. Scott Curls
Yes, I know that these are usually called “Preacher Curls” because they are a strict curl. However, they are also called preacher curls after the first Mr. Olympia Larry Scott. Larry Scott was famous for his amazing biceps which he built slaving away at this exercise so let’s give him the honor of these being called Scott Curls.

The bench pad holds your arms in place which forces you to actually use your biceps to curl the weight. EMG research from the 90’s (this is where the place electrodes on muscles to see which exercise causes the highest electrical activity) found that they highly stimulate the biceps! Note: while they are great for the biceps, they are not the friendliest exercise on the elbows. Avoid them if you have elbow problems, and if you don’t – proceed with caution and do not over-do them.

9. Zercher Squat
This unique squat variation is named after Ed Zercher. While it looks weird (and no, it is not the most comfortable squat variation), having the bar in this position has some great benefits: 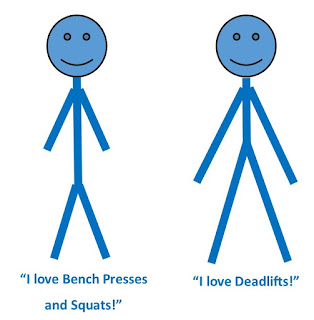 10. Zottman Curls
Zottman curls are named after legendary strongman Geogre Zottman. This unique curl variation starts like a normal dumbbell curl with your palms up (supinated). However, at the top of the movement, you rotate your hands so that your palms face down (pronated). Then you slowly lower the weight and when you get to the bottom, you rotate your wrists back to the starting position.

One effective strategy for maximize your arm size is to train the bracialis muscle which sits underneath your biceps. If you pronate your wrist (turn your palm down) when you do curls, the biceps disengage and you are forced to rely more on your bracialis. Zottman curls allow you to use the help of your stronger biceps to lift heavy weights and then do a nice, slow lowering motion (eccentric muscle action) to emphasize your bracialis. This can be fast, simple way to stimulate new arm growth.

How about you? Have you tried any of these ones before? Are there other exercises with human names that you have found helpful? I invite you to leave your questions or comments below or on my Facebook Page.

Email ThisBlogThis!Share to TwitterShare to FacebookShare to Pinterest
Labels: Exercises