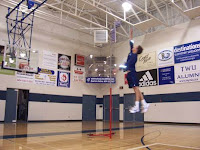 Last week I had a great time testing our Men's volleyball team. I say great time not only because they are a great group, but also because they got some great results! I love it when performance tests reward athletes for all their hard work during  a grueling off season. During the testing, I saw an interesting correlation to athletic performance that I have seen in the past and was delighted to see again...


The first thing I assessed was their body composition and I was pleasantly surprised to find that a lot of the guys were leaner than they had been in the past. We followed this up several performance tests and cheered as many athletes got PR's (personal records).

Here is the point: a huge component of athletic performance is relative strength (i.e. how strong you are in relation to your body weight). (Note: for more information on this, please see my post on The Secret to Athletic Performance). This is why I am so big on training to build relative strength in the athletes I work with. However, in addition to getting stronger, you can also improve your relative strength by getting leaner.

The one thing I've noticed from assessing many athletes over the years is that a lot of them as not as lean as they could be. For example, I'm often surprised to find that despite having fairly wide hips, I have a smaller waist than many male athletes - even those that I outweigh by 20-40lbs. Now these athletes are by no means "fat" - they are quite lean compared to non-athletes - but they are often not athletic lean. In the same way athletes take certain fitness components past the levels needed to obtain health benefits, they can take their body composition leaner than what the average person who is just concerned with health needs. 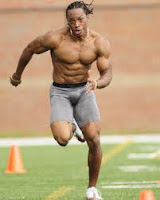 The fantastic thing for an athlete about getting leaner is that it can positively affect everything. When an athlete sheds some extra dead weight their speed, power, quickness, agility and conditioning all improve. Even injury risk goes down as there is less stress on the joints. I have even heard it hypothesized that less intramuscular fat (i.e. fat in the muscles themselves) may improve speed of contraction. Sure there are sports (e.g. sumo wrestling, linemen in football, throwers, super heavy weight powerlifters and weightlifters) who benefit from carrying extra weight - even in the form of body fat. However, for the vast majority of athletes, getting leaner will take their performance to the next level - if they do it right.

The problem for most athletes seeking leanness is that they go about it the wrong way. A common, but huge mistake is adding additional aerobic exercise. This rarely works and is a detriment to performance. Endurance athletes are already doing as much aerobic work as their bodies can handle. Doing more often results in overtraining and/or injury. For the strength/power or mixed sport athlete, extra aerobic work is detrimental to performance as it hinders strength, speed and power.

In almost every case, nutrition is where the already-hard training athlete wants to look to get leaner. The trick with this for the athlete is that there are only certain times of the year when you can be more aggressive with cutting carbs and total calories without hindering training quality, performance and health. Early off-season is the best time to target fat loss for athletes and this period of time also often allows the athlete to adjust training variables to create a greater metabolic effect and further enhance fat burning. If you are outside of this athletic fat loss window of opportunity, your best option is to look at cleaning up your eating. Most athletes eat a lot of junk and justify it by saying, "I'll burn it off." While they may not get fat during their athletic career, they will not be a lean as they could be. Without drastically changing caloric intake, cleaner eating will create a more favorable hormonal environment for fat loss and performance improvement, enhance recovery and improve energy. More on this to come shortly...