A Simple Way to Sprint Faster and Jump Higher

Want to take your performance to the next level? You already know that improving your sprinting speed and vertical jump with help you dominate the competition. However what is the best way to do this? Traditionally athletes used plyometrics, speed drills and Olympic-style weightlifting. However there is a newer exercise for building explosive power that is starting to attract attention in the research world as a great way to run faster and jump higher. 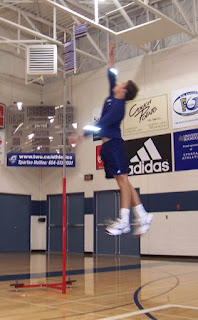 Enter the Hex Bar Jump Squat
The new kid on the block for building explosive power is the hex bar jump squat. It involves taking a hex or trap bar (which is a specialty bar that is traditionally used for deadlifts and shrugs) and doing jump squats with it. Here is what it looks like.

I have used the hex bar jump in my own training and with my athletes. One of my frustrations with the lift is that there was limited research done. However, last month, the Journal of Strength & Conditioning Research came out with a study that looked at the relationship between the hex bar jump squat and athletic performance.

The Methods
The study used 17 male professional rugby players. This is always cool to see a study done with elite athletes who are strong and experienced in the weight room (too many studies use beginners). Researchers had subjects stand on a force plate and tested them with the hex bar jump squat at 10, 20, 30 and 40% of their Box Squat 1RM to find the load that produced greatest power output. Then they tested the athletes’ 10m and 20m sprint times and their vertical jump. Afterwards, researchers crunched the numbers to see the correlation between their peak power in the hex bar squat jump and the athletes’ performance (sprint times and vertical jump).

The Results
The results found a significant correlation between hex bar jump squat power with both vertical jump and sprinting acceleration speed (10 and 20 meters).

What I personally like about the Hex Bar Jump Squat
Fast and easy to teach
Athletes often have little time to train as it is. Exercises like the Olympic lifts require time to teach and time to get good at before you notice the results. (Note: I still love Olympic lifts for many athletes, but they are a long-term investment). Also athletes already have their motor skill learning abilities taxed with learning the various skills required of their sport. As a result, simplicity in the weight room is helpful.

Less landing stress
When you do jump squats with a barbell, you land with your body weight and the weight of the barbell. This can put more stress on your lower body and more compression on your spine. With the hex bar jump squats, you can shoot your hips back on landing and let the weight crash to the ground and thus reducing landing stress. This can also help enforce good landing mechanics.

Emphasizes a more hip-dominant jump
With barbell jump squats it is easier to just jump with your knees.

Bonus Section: Optimum Load for the Hex Bar Jump Squat
This month another study came out which looked at the optimal load for the hex bar jump squat. Researchers found peak power was between 10 and 20% of box squat 1 rep max. While this does not mean that heavier weights are not helpful, you may want to stay lighter with this one. When using this exercise with my athletes, I'll often tell them, "Make it harder by jumping higher!"

Hopefully over time, more research and real-world experimentation will be done on hex bar jump squats. If you have tried them, please let me know what you think of them in the comments section below or on my Facebook Page.