5 Reasons I Don't Use Crunches

I'm not trying to be cool, trendy or "cutting edge"
I'm not trying to be dogmatic or difficult
I know crunches are one of the most popular fitness exercises in existence
I know many people have a different opinion on this than I do
However, I don't use crunches in my own training and I don't prescribe them in programs I write
Here is why… 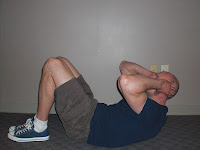 Reason 1: You cannot spot reduce anyway
Many people have toning and flattening the stomach is one of their top fitness goals and believe crunches are a way to see their abdominal dreams become reality. Unfortunately, you cannot spot reduce fat off your stomach. While it seems that many people know this intellectually, I'm surprised at how much attention the abdominals get in the gym. The most important component for good looking abs is body fat loss. Sure, there is a small percentage of bodybuilders and fitness competitors who need to actually hypertrophy abdominals a little bit more, but 99.9% of the time people simply need to reduce body fat to reveal abdominal muscles they already have. Effective fat loss is done by nutrition, whole body strength training, proper energy system training and healthy lifestyle habits – not direct abdominal training!

Reason 2: Crunches can be bad for your lower back
Several years ago, people jumped on the bandwagon of crunches because they were easier on the back than sit ups. While this is often true, they are still not healthy for your spine. According to low back expert Dr. Stuart McGill, repeated spinal flexion is a risk factor for low back disorders. Add a twist to your crunches and you make it even worse. Yes, you can do curl-ups instead (a modified crunch without the spinal flexion and thus low back friendly), but you still have all the other problems.

Back in August 2011, the Journal of Strength & Conditioning published an article by Bret Contreras and Brad Schoenfeld which challenged this notion that lumbar flexion is really as bad as we have thought. I'll expand on this in another post. Even if it is not as bad as we originally thought, you still have the other issues discussed in this post.

Reason 3: Crunches are not functional
While it is true that functional abdominal endurance and strength (though often overrated) is important for daily life, work, injury prevention and sport performance, crunches will not get you there. Lying on the floor and repeatedly flexing lumbar spine has virtually nothing to do with most sports and real-life activities. In order for the abdominals to be effective at improving performance and reducing the risk of injury, they need to be trained to resist – not initiate movement at the lumbar spine. The only thing crunches are functional for is getting up off the floor after being knocked down by an opponent – something we don’t want to train for.

To take it one step further, I have found that crunches are not only non-functional, they're actually dysfunctional. I have found that the athletes who do the most crunches have the hardest time getting into and staying in a strong athletic position. When we try to get them to tighten their abs, they often revert back to the hunched over crunch position.

Reason 4: Crunches create other upper body problems
Repeatedly bending the torso with the head forward and with rounded shoulders is basically practicing bad posture.
This is especially problematic for the average North American who spends all day practicing bad posture as he/she sits in front of the computer screen. These postural problems can contribute to headaches, neck aches, shoulder girdle dysfunction and increased risk of injury when doing upper body exercises or playing sports. And, for those who are only interested in aesthetics, small chests, rounded shoulders and forward head posture are not what you want.

Reason 5: Crunches do not provide sufficient intensity for most people
Imagine if you were to use a weight so light on the bench press that you could do it 200 times. You don’t need a PhD to know that if you can do a bench press 200 times, the resistance is too light to do any good. For most people, crunches without additional resistance are too easy to increase strength or accomplish anything of use. Yes you can add weight to your crunches, but then you still have the other four problems previously mentioned.

This blog is not intended to tell you what to do. However, if you do crunches, I would encourage you to question why.
Posted by Andrew Heming at 08:23